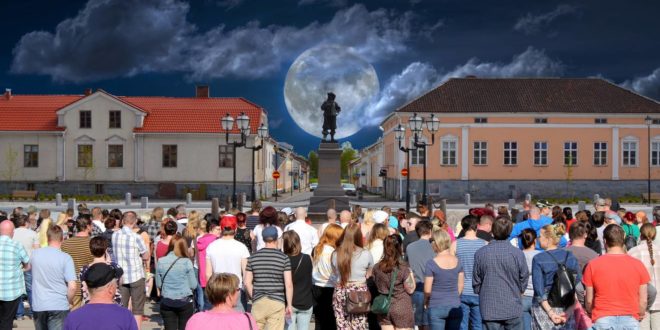 The website presents well-known people from Raahe, i.e. public figures from Raahe, who made an impact at different times.

What is Raahe known for?

Raahe is known for its public figures, baseball and history, as well as its attractions. Raahe is also an idyllic seaside town, which stands out as a distinctive, child-friendly small town based on history and the sea, where all services are easily accessible, no matter where you live in the city, and which positively stands out as a unique entity based on events, industry, tourism and sports services, and the environment.

Jenni Aleksandrova (born 1980) is a radio and TV presenter from Raahe. During her successful career she worked for several radio stations, including Radio Rock, Radio Suomipop and Radio Aalto. On television, she hosted the Voice of Finland and Royal Wedding. Also, she worked for Nelonen channel as a news reporter and presenter of the program Kummalliset kammot.

Joonas Donskoi (born 1992) is a hockey player originating from Raahe who plays as a winger for the NHL team Seattle Kraken. He started playing hockey for the Raahen Teräs-Kiekko at the age of five. When he was 15, he moved to Oulu, playing several seasons for a local team. In 2009, he signed with Kärpät, making his debut in the elite Finnish hockey league. In 2010, he became bronze medalist of the U-18 World Championship. His NHL career started in 2015 when he joined San Jose Sharks.

Sanna Hirvaskari (born 1981)is a dancer and TV presenter who is famous for her appearance in the MTV3’s Dancing with the Stars. She won the 2006 season and finished third in the 2007 season as a dance teacher. Her most successful television roles were the host of Miss Finland 2009 and singing program Biisikärpänen. In 2009, a famous tabloid declared Hirvaskari the hottest Finnish TV presenter.

Katja Hänninen (born 1980)is a Finnish left-wing politician who lives in Raahe. She has been acting as a Raahe city councilor since 2009. In 2014, she became a MP, replacing one of her colleagues who was elected in the European Parliament. She is member of Finance and Economy Committee of the Finnish Parliament.

Minna Jatkola (born 1974) is a Raahe visual artist known for his large-scale paintings describing the society. He addresses such topics as homelessness, loneliness and eternal search for identity. Jatkola has a rich educational background, having studied at Liminga Art School and Lahti Art Institute. His works have been displayed at Gelleria Heino in Helsinki.

Jyri Junnila (born 1984) is an ice hockey player and coach who currently trains the Raahen Ice Hockey Club. He played 661 games in the regular season, scoring 166 points. He won three times the gold medal of the Finnish Championship in Kärpät, as well as silver in 2003 and bronze in 2006. He is also the bronze medalist of the 2004 U-20 World Championship.

Lotta Jääskelä (born 1985) is a singer and songwriter from Raahe who is known by the Finnish audience as Ylva Haru. She has an EP (Tuulensuoja) and an album (Linnut) released under this name. She also has two albums in English: It’s About the Feeling and Blue Autumn.

Inkeri Kerola (born 1957) is a politician who was MP from the center camp in 1999-2015. In the last four years of his mandate, he acted as vice-chairman of the Education Committee. Besides, he was a Raahe City councilor from 1993 to 2017. In 1997-1998, he was the chairman of the Raahe City Council. Kerola completed a teaching degree in 1980, and graduated as a special education teacher in 1996.

Petri Keskitalo (born 1967) is a former general athlete. He still holds several national records in sprint, long jump and multidiscipline series. He won gold medal at the 1986 Youth World Championship in decathlon. His best result at adult competitions was the fifth place at the 1991 World Championship in Tokio.

Heikki Kinnunen (born 1947) is a singer and actor who has become known for his television sketches and outstanding theater performance. He started his career at Lapua Opera in 1966. In 1971-1977, he was member of the Turku City Theater. Kinnunen was part of the golden ensemble that increased the popularity and reputation of Turku Theater. Kinnunen also acted at theaters in Helsinki and Tampere. In television, he is known for his sketch-based entertainment programs.

Hannu Lassila (born 1954) is a former ice hockey goaltender. He was the member of Finland’s national team and played at two World Cups and once at Canada Cup. He won the gold medal at both the Finnish and Swedish championships. He won the SM Liiga in 1983 and took the bronze in 1976 and 1982.

Juha-Pekka Leppäluoto (born 1974) is a musician from Raahe who acts as the vocalist and guitarist in the metal band Charon. He is also a member of the symphonic metal band Northern Kings. In 2000s he was member of Poisonblack and he sang on the Escapextancy album released in 2003. He left the band after the album release and joined Charon. Moreover, Leppäluoto worked as a stage music composer for Raahen Theater. Since 2016, has been involved with his solo career, giving out his first solo album Piilevää pimeää in 2020.

Tero Liete (born 1958) is a radio host originating from Raahe who has become famous for delivering the music program Rockradio that started in 1980. After a while, Liete was appointed as the chief music editor at Ylesradio. He also worked for Radiomafia since its foundation. Nowadays, Liete is involved in Radio Suomi channel’s activities, creating such programs as Poppikoulu quiz and The Hunters of the Lost Record.

Matti Lievonen (born 1958) was the CEO of Neste Oil Oyj from 2008 to 2018. He started his career as a project engineer and automation manager at local companies. Then he moved to France to work as technical director at the Stracel plant. He was part of the management team of UPM Group from 1986 to 2008. Since 2018, he has been acting as chairman of Fortum’s board.

Reijo Lumisalmi (1949-1987) was an amateur musician born in Raahe who became popular in the music world thanks to his memorable songs Yksinäinen (1979) and Suvivalssi (1980). He has composed a large number of songs for Finnish singers. For example, he created 5 songs for Ahti Lammi’s debut album in 1980.

Hanna-Leena Mattila (born 1968) is a Finnish politician with centrist views. She is a Raahe City councilor since 2009 and a member of the parliament since 2018. She acquired her MP status in June 2018 when she replaced a colleague. In the 2019 elections, she won a new parliamentary seat in the Oulu constituency.

Martti Merenmaa (1896-1972) was a journalist and writer. At the age of 18 he ran away from home and ended up in St. Petersburg where he studied at the Academy of Arts. He returned to his hometown in 1917 and got enrolled in the Raahe Business College. When the civil war started, he interrupted studies. After the war, he left studies for good and became the editor of Karjalanmaa Magazine. He also worked for other literary magazines. In 1920s, Merenmaa joined the Finnish Writers’ Union.

Janne Niinimaa (born 1975) is a former ice hockey player who won the bronze at the Olympics in 1998, the gold at the World Championship in 1995, and bronze at the 2000 World Championship. In the 741 regular season games he played, he scored 54 goals and gave 265 assists. He played in four hockey leagues during his career: Finnish, Swedish, Swiss and NHL. He retired in 2014.

Lasse Paakkonen (born 1986) is a cross-country skier who participated in the World Cup from 2008 to 2016. His best result was eighth place in the Oslo freestyle sprint race in 2010. He also finished tenth in the Vancouver 2010 Olympics pair sprint.

Markus Poukkula (born 1988) is an ice hockey player who plays in the French Ligue Magnus. He started playing hockey at the age of six. Then he moved to JYP’s C-junior team and evolved to the JYP’s adult SM League team. After playing in several Finnish and German teams, in 2021 Poukkula signed with Brûleurs de Loups de Grenoble where he plays to present day.

Samuli Putro (born 1970) is a musician and songwriter born in Helsinki. His family moved to Raahe after he was born, so he spent his childhood and youth in the northern maritime city. From 1992 to 2007, he was member of the band Zen Cafe where he acted as guitarist and songwriter. When the band took a break, Putro decided to start his solo career. He released seven albums as a solo singer. He also composed the music for some films, including Freetime Machos and Menolippu Mombasaan.

Yrjö Reinilä (1916–2010) was an important figure in Raahe’s administration in the 1960s and 1970s. He was as a city councilor and mayor of Raahe from 1961 to 1979. Before assuming the highly-ranked office, he acted as Raahe’s mayor of justice and owned a law firm.

Miikka Salomäki (born 1993) is an ice hockey player who represents the Swiss club Laussane. He made his debut in the Raahen club Teräs-Kiekko. He joined the Major Hockey League in 2010 as member of the team Oulun Kärpät. A good part of his career he played in the American Hockey League for such teams as Milwaukee Admirals and Colorado Eagles.

Pertti Salovaara (born 1970) is a radio journalist and former centrist politician. In the 1990s, Salovaara worked for Radiomafia, hosting a humurous-musical program, called Salovaara Show. His program turned to be highly successful and brought him popularity. He became a gig host and a TV presenter. He acted as a host in several MTV3’s shows. He was also elected member of the parliament in 2003, representing the centrist camp. He withdrew from the politics in 2011.

Risto Sassali (1928-1985) was a Finnish poet and resident of Raahe. He started to write poems at the age of 14. His first poems were published 1950 in a Raahe literary magazine. Sassali wrote rhymed poems about sailor life and his hometown.

Aku Sipola (born 1989) is an actor who has become popular for playing Reino Tuomi in the drama series Uusi päivä. He also had a role in the MTV’s series Salatut Elämät. In 2022, he played the mental wellness coach in the sketch-based entertainment program Putous.

Jussi Talvi (1920-2007) was a writer and journalist who has released several crowd-pleasing gastronomic and travel books. His collection includes other non-fiction books, novels and a play. His first book “Is this what youth is like” was released when Talvi was 24. In addition, he wrote scripts for Teuvo Tulio’s and Roland af Hällström’s films.

As you noticed, several well-known people have lived in Raahe over the years, and if there are still missing people or information, please let us know so we can complete our list of well-known people from Raahe.