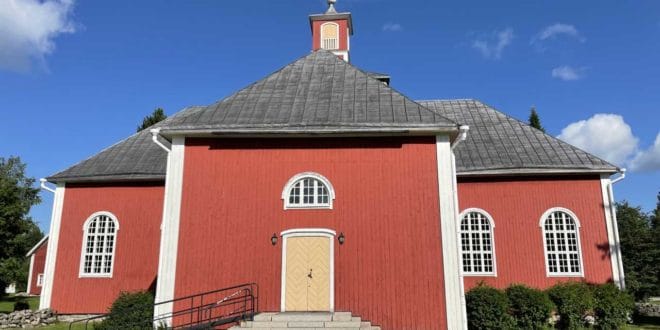 The Vihanti church was built in 1784 when king Kustaa III held the crown. The official name, Sofia Magdalena Church, venerates the king’s wife. The church boasts an altarpiece designed by Emmanuel Granberg, a large wall painting depicting Jesus on the cross, and two eye-pleasing candle chandeliers. It hosts different events all year round with a maximum attendance capacity of 500 people.

The first church was built in 1691 and consecrated on Advent in the same year. It was small, rectangular and poorly decorated. It was demolished in 1784 and the construction of the new God’s house began. The new church was designed by Simon Silven and built in 66 days. The former church’s wood that was still in good condition was used to build the floor of the new church. The building has a cruciform shape and a pitched roof with a central dome rising above it. On top of the dome is a lantern and a spike.

Initially, the church had a tile roof. During the renovation in 1882, a shingle roof was installed, which was replaced by the current tin roof in 1909. The color also varied over centuries. Originally, the church had a log surface. Later, the outer walls were covered by vertical boards that were painted in red. In 1882, the exterior was painted in yellow. Afterwards came gray and white, which lasted a couple decades each. Following a referendum in 1984, the church was painted in its current color, red.

The Vihanti church has baroque pulpit bought from the church of Oulainen. During the restoration in 1960, bible-themed paintings were found under the white color of the pulpit. On the wall behind the altarpiece, there is a painting of Jesus on the cross and Virgin Mary and John standing nearby him. The visitors’ eyes are also drawn to the panel painting on the chair depicting Paul and the evangelists. A great aesthetic value is brought to the church by the two bronze-painted chandeliers with 20 candle branches. The candles are lit during the events, bringing light and warmth in the church. Moreover, the entrance corridor is ornated with two crystal chandeliers that have been donated by Oulu’s town hall.

In the 17th century, the villagers buried their relatives in the basements under the church. This burial rule was applied during the construction of Sofia Magdalena Church as two types of spaces were reserved for the dead: burial places built in brick and a graveyard where the deceased were buried and covered with soil. The current Vihanti’s cemetery dates back to 1887. An expansion was carried out in 2000 and a beautiful stone fence was built around the graveyard.

Where is Vihanti Church Located?

The church space can be rented for various private events. You can make an appointment by phone. The church is open to the public in all seasons. After it was included in the road church system, the number of visitors significantly increased. Although there isn’t a hired guide, the parish workers and volunteers show the guests around and help with the necessary.