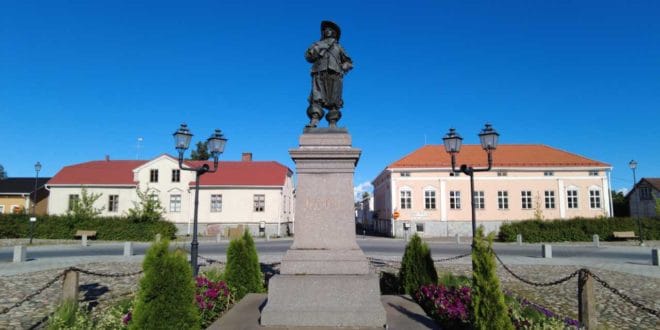 Per Brahe Statue is a statue erected in 1888 on the Pekkatori square dedicated to the founder of the city and governor of Finland, Pietari Brahe. Walter Runeberg made this sculpture for the city of Turku, but the pedestal in Turku was too large, hence, the statue found its place in Raahe.

The history of the Per Brahe Statue

In 1880, a statue fund was created to raise money for the statue’s erection. Sales and raffles were organized every month to collect the needed money fast. Also, bourgeoisie evening parties were held a couple of times a month with dances, songs and plays which increased the fund significantly. Originally, the statue was meant to be installed in Turku, but the statue was too small for the pedestal in Turku. As a result, the statue was placed on the Pekkatori square in Raahe.

According to the 1811 city plan of Gustaf Odenwall, the Pekkatori square had to host the main shopping area and the administrative district of Raahe. Plots of land were sold to rich merchants and shipowners. But the installation of the statue changed the appearance of the square and the market was transferred to Rantatori. The statue is surrounded by four lanterns which illuminate the sculpture during night. The stones on the grass were brought from the Raahe shore. On the pedestal one can read the name of the governor in fractured letters. The unveiling ceremony took place on September 12, 1888, with dances, songs and solemn speeches.

A governor who loved food and wine

Pietari Brahe came from a rich and influential Swedish family. He started his career at the administration of the Visingsborg county, then he got promoted to the court of the Swedish king. He was the favorite of the king Gustav II, but after his death, Pietari’s popularity decreased. After a period of stagnation, his career revived as he became the governor of Finland. Under his rule, Finnish economy grew and culture life flourished. The count lived for a couple of years in Finland, but he never visited Raahe. He drove along the coast on a sledge and inspected the area, planning out the best location for the administrative district and market. He founded the new town in 1649, naming it Salo. After a while, the town was renamed to Brahestadt.

The count was passionate about food. He wrote a recipe book by hand that comprised 600 recipes of his beloved dishes. The book can be found in the Raahe library. In addition, he had a soft spot for wines, being known as a connoisseur at his court.

Where is the Per Brahe Statue Located?

After more than 400 years, the memory of Pietari Brahe lives in Raahe. The count’s statue steals the show on the Pekkatori square and one street is named after him. Pietari Brahe was always a welcome guest in Raahe. A chamber in the town hall was prepared specially for him but he never came there. The hall was destroyed by the fire in 1810. A festival in the memory of the count is organized every summer with exhibitions, songs and a ceremony where the count’s statue is decorated with flowers.