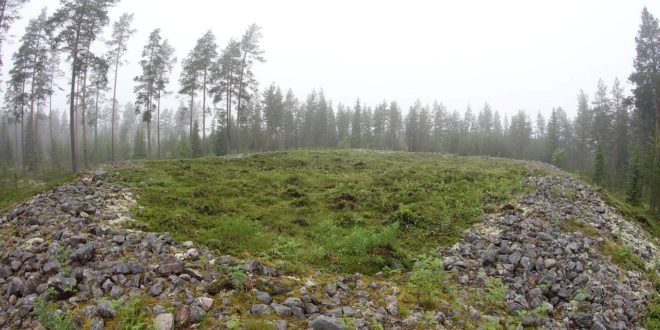 Kastelli castle ruins is an enigmatic ancient relic represented by a giant church located in Raahe Pattijoki. A giant church is a large ring made up by stone ramparts with gate-like openings here and there. The site dates back to the Stone Age and is considered the largest giant church in Finland.

A mysterious structure that attracted archeologists at all times

Kastelli has an almost rectangular shape, but the angles are round. It’s 60 meters in length and 35 meters in width, while the ramparts are about 7 meters wide. The yard is cleared of stones and mainly represents a flat terrain covered by lush greenery. The mysterious object is surrounded by marshy forest areas and man-made mounds with pits in the center. It is said that the pits served as a space for hunters to store and hide their catch. According to other assumptions, the pits were made to trap the big preys.

Numerous archaeological excavations have been carried out throughout centuries, but no precious items have been found. However, tampering the ancient remains in the area is considered illegal. The findings represented objects from quartz and slate, broken hunting tools, and stone manufacture waste.

The purpose of Kastelli Castle Ruins is still a mystery

There are many opinions on the real purpose of this giant church. In the 19th century, archeologists believed that the church served as a place for separating and marking the reindeer. Other researchers considered the ruins to be the foundation of a defence structure. Some people attributed the stone remains the role of a former cult center. A popular theory touches upon the Late Stone Age hunters who led a nomadic lifestyle. They came at the coast in the spring to hunt for seals and concomitantly built temporary settlements using the beach stones.

The high walls protected the hunters and fishermen from bad weather and potentially dangerous animals roaming around the forest and also acted as storage facilities. While all theories seem plausible, none of them has been proven to hold true for Kastelli giant structure. Proving any of the assumptions is difficult because of the ancient age of the church. However, this unsolved puzzle makes Kastelli highly attractive attraction for tourists.

Where can I find the Kastelli castle ruins?

Kastelli is located at Linnalantie 74 in Pattijoki municipality, Raahe. There is a parking lot nearby where the navigator will lead you. Next to the parking lot, there is a cafe where you can eat a snack before and after visiting the ancient place. The area is also equipped with a public toilet. From the parking lot, you have to walk a couple hundred meters until you arrive at the giant church. The forest path that leads to the church is fully marked so it’s impossible to deviate from the trail and get lost in the forest. There is a resting place with tables and benches where you can sit and enjoy the enigmatic relic and the impressive scenery.

Keep in mind that according to Antiquities Act, it’s forbidden to dig, damage or steal the ancient remains in the area.