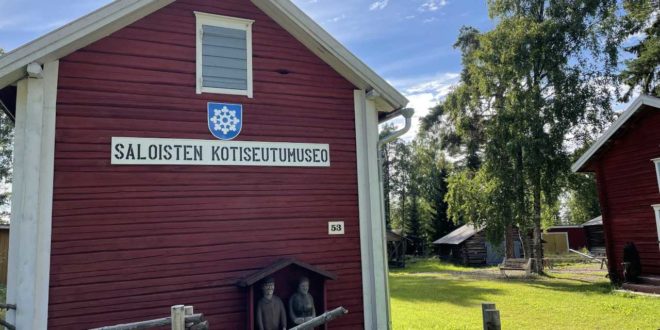 The Saloinen Museum is a unique place where you can experience the culture of local communities. The museum’s exhibits are distributed in 18 buildings and tell about different peasant livelihoods of people of Saloinen. As you wander through the large territory of the museum, you will see a blacksmith’s workshop, a fish house, a windmill and other interesting buildings and artefacts.

The history of the Saloinen Homeland Museum

The first step to the creation of the museum was the foundation of Saloinen home region and museum association in 1965. The first buildings received by the association from Saloinen municipality were two grain sheds which were renovated for the storage of museum artefacts. The second major step taken by the municipality that helped the museum to grow was the donation of a plot of land to the association. The empty land soon turned into a mini village as more and more buildings were moved to the museum area. After Saloinen merged with Raahe, the museum association passed into the hands of Raahe administration.

There are 18 historical buildings spread across the museum area. They are renovated and pleasing to the eye. The decision to paint red and white all buildings increased significantly on the esthetic value of the museum. Located in the middle of a forest, the museum allows you to enjoy the fresh air and beautiful birdsong while exploring the buildings. As you approach the complex, the windmill stands out from the crowd with its giant white blades. Nearby is a grain shed. As you continue your museum tour, you will see a fisherman house that dates back to the 19th century. The small house shows how fishermen lived in the past in poorly-equipped and cramped rooms.

The salt shed is a large shed used to store salt during the sailing ship era. Initially it was located on the shore, then moved to the museum village in 1985. Another interesting building is a 18th century two-story loft that was vandalized by Russians during the Finnish War. According to rumors, the building is haunted. If you are passionate about old technology, there are two equipment sheds with tools, work machines, tractors, and horse-drawn vehicles. In a separate storage room you will find a fire truck from 1930s. An ancient rowboat is also found on the territory of the museum.

Where is the Saloinen Museum Located?

Sauna lovers will like to explore the 19th century smoke sauna. Nearby is a modest wooden well hidden in the shadow of immense pines. The collections of Saloinen Museum comprise 1,500 objects. Among them are axes, gauges, saws, coffee grinders, cages, and even a twin stroller that looks way different than fancy strollers used today.

The museum also touches upon the spiritual side of Saloinen people, having a collection of spiritual literature by a local writer. A professional guide will tell the story of each artefact and talk about the traditions, hobbies and lifestyle of Saloinen people. The museum is located in Arkkukari, 7 km from city of Raahe, and is open only in summer. If you wish, you can also visit other attractions in Raahe.