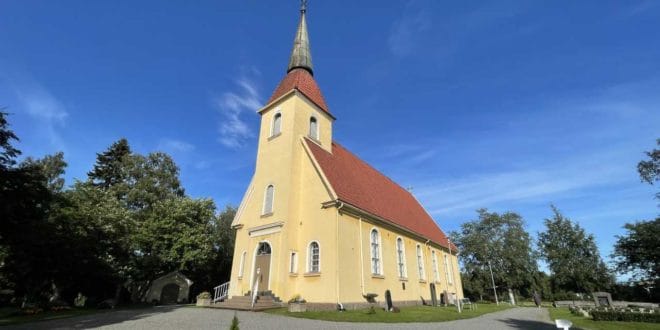 The Saloinen church, also known as St. Olav’s Church, originally called the church of All Saints, is located in the area of the former Saloinen municipality in Raahe. It’s is one of the main attractions in the Raahe’s municipality of Saloinen. The church dates back to 1932 and was built on the place of the old church that got destroyed in a fire in 1930. Some precious items were saved from the old church and transferred to the new one. The Saloinen Church is made from cement brick and can accommodate 300 people.

The old wooden St. Olavi Church was built in 1490s, being named after the Norway king who converted to Christianity, Olavi Haraldinpoika. After a storm in 1723 the tower of the church tilted. The tilt got worse with time and the bishop decided to tear it down in 1725. The last service in the church was held in 1930 when a fire erupted in the chimney. Since the building was made of wood, the fire spread fast and destroyed the whole church shortly after it had broken out. Fortunately, some valuable objects were saved before the flames reached them. They were then displayed in the new church as a heritage from the old church.

People started to build the new church in 1932. It was larger than the previous church, had a tower with bell, and was built from cement brick. It was also connected to the central heating system. A collection of funds was organized, which helped the construction to evolve fast and soon after it started, the saved items got moved to the new building.

On the day of fire, the altar cabinets of the Virgin Mary and St. Olavi were at a church exhibition in Helsinki. This helped them to avoid the rage of flames and be preserved to present day in the Church of Saloinen. The wooden sculptures of the two saints are also well preserved. The Olavi’s statue had suffered a slight damage but was successfully renovated. The altar cabinets of Peter and Paul were destroyed and only the sculptures of the apostols were saved and now decorate the All Saints’ Church.

A 15th century crucifix was removed the burning building at the last moment. Nowadays it ornates the altar. A couple of stained glass windows with biblical paintings were designed by the artist Onni Oja in 1979 and donated to the church. There is also a cupboard with utensiles that dates back to the 1500. Other art include some medieval wooden sculptures that are displayed in the sacred building and represent a memory of the burnt church.

Where is Saloinen church located?

In the church’s yard there is a beautiful alley of stone graves dedicated to fallen soldiers. In front of the hero graves is a bronze monument of a soldier and a cross that were completed in 1971.

Open all year round

The church is open to the public all year round. The church’s staff can offer you some information about the artefacts, if you’ll ask. Private events with up to 300 people can be held in the Church of Saloinen. Don’t forget to make an appointment.