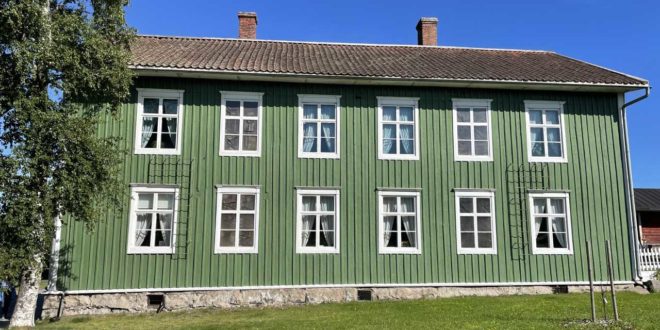 Dating back to the 18th century, the Sovelius house is one of the oldest buildings in Raahe. Merchant Matts Sovelius bought a plot of land near the city palace of the first Raahe’s mayor on May 5, 1777, and built a new house. It was a bourgeois two-story house lined with masking board and packed with all features that were trendy in the 18th century. Nowadays, the building serves as a museum showing the luxurious life of a shipowner and merchant in the sail age.

The history of the house of Sovelius

The construction of the Sovelius House came to an end in the early 1780s. The house experienced window and façade renovations in the 19th century. Also, minor interior design changes took place as new owners came over. Other than that, the house has done well at preserving its original appearance. The Sovelius family has had a great influence on the history of Raahe since its foundation. Most of its members were merchants and shipowners. Besides the 18th century two-story mansion, the family built other houses across the town in line with the highest standards of luxury. The size and opulence of the houses prove how influential the merchant family was in Raahe.

The Sovelius House was inhabited by many members of the family throughout the 18th and 19th centuries, including Matts’ daughter and her husband and the influential shipowner Johan Sovelius. In 1886, sailor Henrik Sovelius created an aid fund and decided to rent out the upper floor of the house to tenants while leaving the ground floor to the family members. Some organizations and private individuals rented the house until 1974 when it was rented out to Raahe city. In 1989, the house passed into the hands of the Raahe Museum that transformed the upper floor into a sailing age museum.

The upper floor was restored to the style of a 18th century shipowner’s apartment. Visitors can see the opulent lifestyle of merchants in the golden sailing era, including exquisite furniture, a medieval piano, ship paintings, novelties of the period, elegant tableware, a beautifully ornated fireplace and other objects that take you back in time. The green plants that bloom in the hall are the same as those that were used in rustic houses in the 19th century. Some species include Chinese rose, house spruce and apostol’s sword. They blend perfectly in the luxurious design of the house, adding a touch of freshness. The walls are vibrant and eye-pleasing thanks to the paintings that decorate them. The paintings depict sailing ships, nature landscapes, animals and portraits of family members.

Where is the Sovelius House Located?

Before Christmas, the house is ornated with 19th century Christmas decorations while stories of old traditions complete the atmosphere. The museum is open on weekend days from 12 to 4PM. You have to reserve a place on a guided tour in advance. Up to 10 people can participate in a guided tour during which you will be shown all the rooms on the upper floor and provided with detailed information about artefacts and the owner of the house.