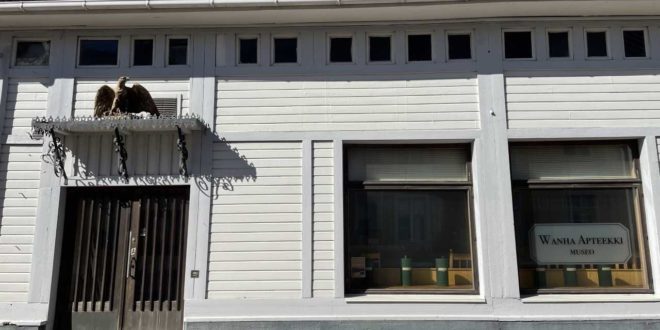 The Old Pharmacy is a museum in the center of Raahe that exhibits pharmaceutical artefacts from the 19th and 20th centuries. The collections include ceramic jars and wooden boxes for storing herbs and chemicals, medicine sales packages, and tools used in the manufacturing of medicines.

The history of the old pharmacy

In the late 18th century, several smallpox epidemics assaulted Raahe. Funds were collected to build the town’s own medicine warehouse. The medicines were sold to the rich and donated to the poor. After the illness stepped back, a small pharmacy was created from the remaining medicines. The township rights acquired in 1791 helped Raahe to develop at a rapid pace as the flow of goods and people drastically increased. This also made diseases to spread faster through the city and nearby municipalities. In these hard times, pharmacist Jean Galenius received the right to found the first pharmacy in Raahe with its own warehouses and labs. The pharmacy survived the Finnish War in the years 1808-1809 and the great fire that followed in 1810.

During the time when the pharmacy was owned by Karl Wichman, its location was established on Kirkkokatu across from the church. In 1924, the pharmacy moved on Kauppakatu where it served until 1998. In 1999, the pharmacist Paavo Mäkinen sold a part of the pharmacy with some valuable collections to the city of Raahe.

The pharmacy lived its best times under the leadership of pharmacists Väinö and Paavo Mäkinen, which lasted from 1917 to 1997. During this era, the pharmacy was decorated with beautiful birch furniture and lots of precious items had been accumulated. The large pharmacy premises comprised an emergency room, a laundry, a lab, and several warehouses where materials were stored. The attic and basement were full of herbs, equipment and substances used in pharmaceutical operations. Dangerous chemicals had their own rooms including the poison cellar and the acid cellar. In the 1950s and 1960s the pharmacy experienced modernization works, but its appearance didn’t change significantly. The birch furniture and the eagle above the entrance door remained intact.

Establishment of the museum

In 1999, Paavo Mäkinen sold a collection of pharmacy artefacts to the city of Raahe which was displayed in the new museum. The collection includes a variety of pharmacy-related items, from herb storage boxes to old manufacturing equipment to medicine sales packages. Most of the jars and tools date to the 19th century and represent a memory of the pre-industrial medicine manufacturing era. Some boxes still have old medicines left which you can analyze in the presence of the guide.

Where is the Old Pharmacy Located?

The museum is open Saturdays and Sundays from 12 to 4PM. For inquires about the visits, contact the reception by e-mail [email protected] or by phone 044 439 3334. During the museum tour you will see the medicinal artefacts and listen to their detailed description and story told by the the professional guide.

The guide will also tell you captivating medicine facts you might have never heard of. For example, you will learn that Spanish flies acted as an aphrodisiac before the takeover of modern medicines and that 19th-century cough medicines contained opium. We hope you will also get to know other attractions in Raahe.