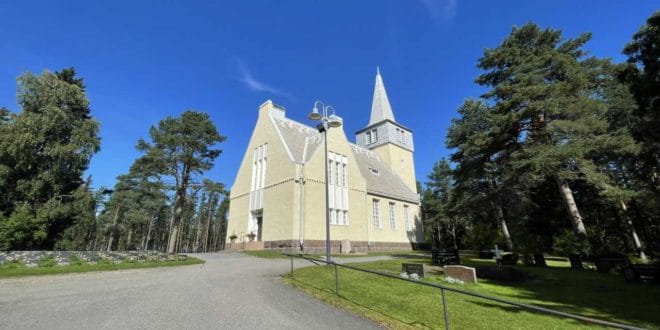 The Pattijoki Church is one of the most popular churches in the Raahe region. It dates back to 1912 and many decorative motifs from the last century have been preserved to present day. The church has a capactity of 250 people and can be rented for sacred events.

After he had successfully completed the Raahe Church, the architect Josef Stenbäck started to work on a new church in Pattijoki. He decided to make the walls and roof from concrete and since it was a new material, some people of Pattijoki were skeptical about it. However, the building stood the test of time and now it looks as appealing as on the day it was founded. The roof is steep and made of cement tiles. At the end of the building there is a tower with a cross on top. For the interior, Josef Stenbäck designed a collection of wooden chandeliers with tallow candles. Many decorations were donated by organizations and individuals as well.

The construction lasted for 1,5 years and the consecration took place on the Advent Sunday in 1912. Electricity was installed a few years after the church’s foundation. Initially, two stoves heated the church. In 1957, the church was connected to central heating.

The church boasts many valuable and appealing items. A Tyrolian gilded wooden sculpture decorates the altar piece. One of the windows has a painted glass received as donation in 1983. The painting is called “The Ressurection”. The church’s architect designed some wooden chandeliers that were similar to the ones in the largest wooden church in the world. Later on, a crystal chandelier was donated to the church. It replaced the wooden crowns which were taken away to storage. During the last renovation in 1998, the wooden chandeliers were electrified and brought back to the church. The crystal crown was moved to the sacristy. Furthermore, there is a 11-tone mechanical organ from 1977 which improves the aesthetics of the church.

Where is Pattijoki Church located?

In 1998, a big renovation took place that aimed at bringing the church’s appearance as close to the original design as possible. The walls returned to their original colors. The gallery floor was raised so as the altar was visible. The first row of pews was removed to make more space in the front of the altar. The wooden candlesticks were restored to like-new condition and electrified. They adorn the walls of the church, serving as a source of light and a handsome decor piece. There is a statue in front of the church that commemorates the soldiers that died in the Finnish War (1808-1809).

The Pattijoki Church has 250 seats. Services like baptism, ordination and blessing entail no fee. Other events are charged. The church doesn’t have a professional guide, but you can ask the church’s employees for more information about the history of the place and pieces of art. If you want to organize an event, you are best off making a reservation at least a week in advance.