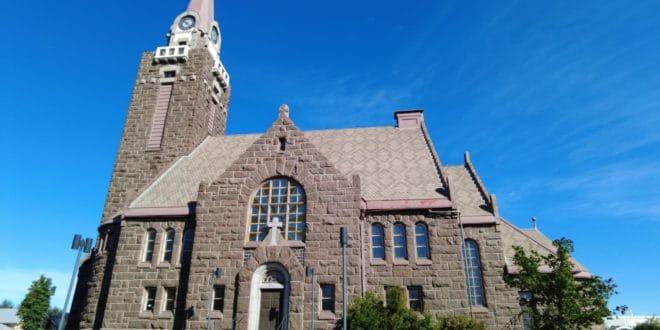 Raahe Church, otherwise known as Holy Trinity Church, is the largest church in the Raahe region. The red granite church represents national romanticism with Art Nouveau elements. The tower of the church has a height of 56 meters and it is seen from the sea. It was used as a lighthouse by seafarers during the sailing age.

The history of Raahe Church

It was built in 1912 on the site of the wooden church that was devastated by fire in 1908. To make the new church resistant to fire, architect and designer Josef Stenbäck decided to build it from granite extracted from the islands off the town’s coast. As the 100th anniversary was around the corner, it was decided to perform a detailed renovation of the church. The goal was to return the original appearance of the church. Comprehensive treatment of all interior surfaces was carried out. The paint was peeled off to reveal the rich palette of colors dating to 1912 when Josef Stenbäck developed the church.

The old furniture was fixed and new furniture was added suiting the church’s initial style. Some extensions were carried out as well. The shell part and central alar were enlarged. The pews were equipped with padding. A new bridal room was added in the back of the church’s hall. The HVAC and electrical systems were renewed. Outside, maintenance of the church’s courtyard was performed. The trees were cleared and the lawn was mowed. A ramp for disabled was added and the façade lights were replaced to new ones.

The altarpiece was painted by Eero Järnfelt, showing Jesus calming the sea storm. The artist named the painting “Awakening Hope”. The pulpit imitates to little detail the pulpit that was in the burnt down church. The founder of Raahe, Pietari Brahe, donated the building materials for the pulpit. The chandeliers look like ship reeling, reminding of the sailing past of the town. The walls are adorned with wonderful sconces that also contain maritime motifs.

Another precious object is the stained glass painting on one of the windows depicting biblical pictures and fishing elements designed by Matti Lampi. The seafaring character of the church is completed by the ship model placed in the back of the church’s main room overlooking the altarpiece. It was made by Olavi Pelkonen and donated to the church in 1990. There is also an organ brought to the church in 2013. The organ was made by the organ crafter Martti Parthan Oy.

In the church’s park there are 3 war memorials. The first one is the statue of Colonel Fleming who died in Raahe during the Finnish War (1808-1809). The second is the Glacial Memorial that honors the soldiers who fell in the War of Independence. Finally, the Departure Hero statue is dedicated to the Winter and Continuation wars.

Where is Raahe Church Located?

You can attend the service at the Church of Raahe every Sunday at 10AM. Private services are held with prior reservation. Unless it’s baptism, ordination or blessing (which are all free), other private events are charged.