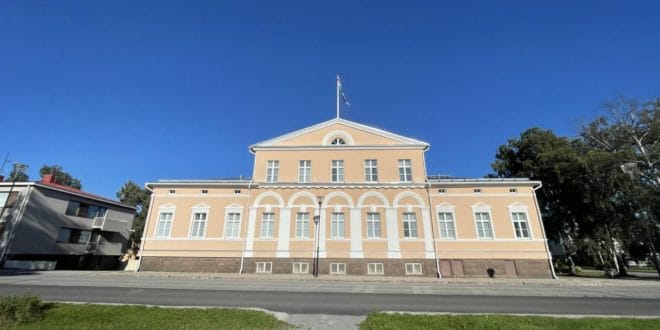 The story of Raahe town hall reaches back to 1830s. When the previous town hall burned down in the 1810 fire, the magistrate and town’s residents decided to built a new one. The construction though moved at a slow pace. After 50 years, Raahe still was without a town hall. Gustav Brunow’s estate offered to sell their huge house to the city of Raahe as a town hall.

The construction of the 25-room house was finished in 1839. The officer moved into the house when 8 rooms out of 25 were ready for living. The purchase deal was closed with Brunow’s heirs after his death in 1862.

Some renovations were carried out after the purchase to bring the house to presentable condition and be able to use it as a town hall. After 100 years, major foundation works were held. Also, the town hall struggled with lack of space, hence, the basement was transformed into a warm and spacious hall. Additionally, an archive and a civil protection center were built. Other works dealt with drainage improvement, façade maintenance, heat and water insulation, HVAC modernization and furniture renewal.

The mastermind of the big renovation was the architect Martti Torvikoski from Oulu. The building has been serving as city office for nearly 200 years now and has been preserved in good condition since the transformation. The exterior kept its 19th century appearance while the interior has a modern style.

The town hall prides itself on an impressive marine painting by the Swedish painter H. Af Sillén. The board shows the Swedish navy engaged in combat exercises. The painting was won by the shipowner Markus Sovelius at lottery in Stockholm. Immediately after he received the price, a representative of the Swedish King came to him and announced that the king wanted to purchase the piece of art. Although the offer was tempting, the wealthy shipowner refused it but he neither wanted to keep the painting for himself.

He donated it to the city of Raahe. Among other paintings adorning the town hall, the Swedish navy board is by far the largest and the most beautiful. It is placed on the ballroom’s blue wall above the red and soft benches and is a few meters longer than other paintings.

Where is Raahe Town Hall Located?

On the painting, there are two Swedish military ships imitating a battle and another ship in the background. Some details spicing up the painting include a flock of seagulls, men on the ship deck, small boats cruising in the sea, the Swedish flags raised on the ships, and the green water coming in great contrast with the light blue sky.

The frames of the painting have gold-colored stucco ornaments which makes it even more attractive. In August 2008, a monument to president Urho Kalevi Kekkonen was unveiled near the town hall. Nearby is a sculpture park that presents 19 bronze-cast statues of the sculptor Kari Juva.