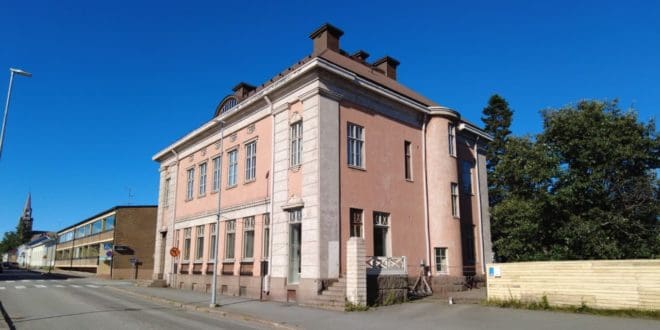 SYP House is the former office of Raahen Yhdyspankki located at the intersection of Koulukatu and Kirkkokatu streets. The building has a historical and architectural importance, being protected by the provincial plan. It was designed by Valter Thomé and completed in 1915, serving as the old bank’s office for 65 years.

According to a 2001 survey, the residents of Raahe consider SYP House as one of the most attractive old buildings in the city. Nowadays, the building serves commercial purpose. The second floor is rented for residential use.

SYP house was designed by architect Valter Thomé, having an entrance hall, a banking hall, manager’s apartment, a boardroom, commercial spaces, a dining room and an attic. For this building, the architect took an exceptional decision, placing the banking hall in the middle of the building’s façade rather than at the corner. He also made the wall between the banking hall and the store space in such a way that it would be easy to torn down.

This decision was very inspired because by the end of 1960s the bank hall couldn’t fit so many clients. The hall was expanded by dismantling the partition wall. In the end of 1980s the bank got overcrowded again and as there were no possibility for further expansion, the bank was moved to other premises.

The building has always been a centerpiece in the cityscape thanks to its outstanding column-based design. The former bank office looks like a stately manor castle and there is a clear explanation for it. The town of Raahe was founded in the 17th century, which was the glorious time of bourgeois manors.

The choice of the building style is justified by the architecture trends that dominated the time when the construction started. SYP House is located in a nationally valuable area, being surrounded by other notable buildings. A short walk to the east on Koulukatu street leads you to the Raahe Central School, a big historical building that represents a mix of Neo-Renaissance and Classicism styles.

The building dates back to 1912 and still functions as a school with an emphasis on music and art classes. If you take a walk along Kauppakatu street to the north, you will end up on Pekkatori, once the main square of Raahe. The square is famous for the statue of Per Brahe, the founder of the city of Raahe.

Where is SYP House Located?

Across from the SYP House, the grid of wooden buildings starts, also known as Raahe’s wooden old town. The wooden buildings date back to the 17th century and are an important heritage and cultural sight, being given protected status. In 2004, the Raahe City Council committed to preserve the row of wooden houses on Koulukatu street across from Yhdyspankki’s office.

This helped to preserve the urban image and historical value of the street. The old bank building has also undergone renovation and maintenance works throughout time. After several paints, the building’s original colors were restored in 2012. Both interior and exterior of the building were restored, including the roof and basement without causing structural damage.