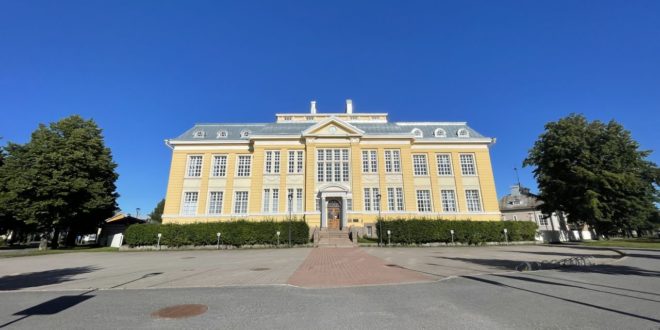 The Raahe Central School was completed in 1912. The construction plan was developed by the architect Johan Jac Ahrenberg. The building is a combination of Neo-Renaissance and Classicism styles. Jac Ahrenberg intended to make a modern school that would give students maximum convenience and encourage communication. This led him to the decision to concentrate the classrooms around a large central hall.

The architect’s excellent skill is felt in the way he managed to combine several architectural styles. Neo-Renaissance is noticed in the shape of the roof, the arched entrance and spacious windows that cover most of the façade. Classicism can be seen in the triangular gable above the main entrance, doric columns on the lower floor and ionic columns on the upper floor. A touch of Art Nouveau is present in the staircase railing composition.

The school was built to replace the old school that burned down in the 1812 fire. A middle school and private secondary classes operated initially in the building. In 1952, they got combined into a joint lyceum. In the war years, the school was used as a military hospital. From 1958, an auxiliary school and a civic school were added, turning Raahe school into a central school of national importance. Since 1974, the school serves as a primary school. The school was renovated in 1987-1988.

The goal was to preserve the historical appearance of the building and modernize the teaching facilities. The ballroom on the ground floor and a chamber music hall on the second floor serve as a place for music classes and cultural events organized by the city of Raahe. After the renovation in 1988, music classes started to be held.

Where is Raahe Central School Located?

Nowadays, Raahe Central School has about 250 pupils who study in the 1-6 grades. An emphasis is put on art and music. The school’s educational goal is to form a creative and well-rounded generation that appreciates the past, takes care of the present and looks forward to making the future better. Students can participate in international projects such as Erasmus and eTwinning.