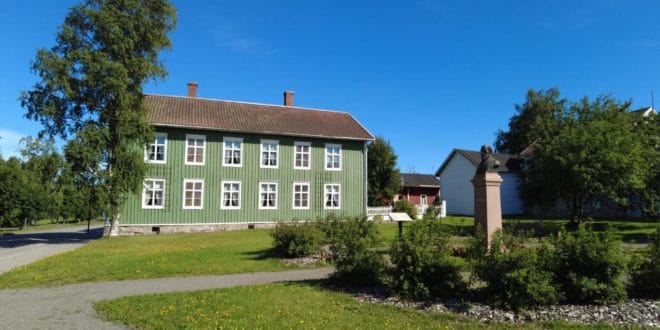 August Maksimilian Myhrberg statue was created by sculptor Evert Porila and acquired by the local community association in 1931.

Myhrberg was born in Raahe in 1797. Myhrberg himself thought that he was born on the last day of the century because it seemed to him mysterious and symbolic. His mother was the Raahe resident Kristiina Sovelius. His father Anders Gustaf was originally from Sweden.

Maksimilian spent the first 6 years of his life in Sovelius House, which is one of the oldest buildings in the town. Today the mansion is the ownership of Sovelius Foundation. The Raahe’s town hall rented the upper floor to organize a museum that shows the life of a merchant during the glorious sailing period.

When Maksimilian was 6 years old, the family moved to Oulu. After high school, he studied at the University of Turku at the request of his father. He wanted to become a soldier but his father insisted that he followed a lawyer career. Read no books other than law books was the order of his father.

After his father passed away, Maksimilian fulfilled his dream of becoming a soldier. He took part in different military campaigns, including the Greek War of Independence and the Spanish Civil War. He earned the reputation of a brave soldier when he fought alongside Greeks against Turks. His dedication and outstanding combat skills made him famous and loved in Greece, a country in which he spent 7 years. In 1838, he was awarded the Order of the Redeemer by the King of Greece.

Myhrberg arrived in Greece in 1825 in a group of volunteers created by French Colonel Charles Fabvier. Initially, he fought in the Cavalry as a trooper. In 1826, he participated in the Battle of Euboea. Then he fought alongside Greeks trying to relieve the Siege of the Acropolis. He was injured but continued fighting. In 1826, he became Lieutenant, later getting involved in the Battle of Chaidari where he was injured again. After the Battle of Cape Colias, he got promoted to the rank of Colonel.

He performed outstandingly during the Battle of Phaleron and the Chios Expedition. In 1829, Myhrberg was entrusted to rule and defend the Palamidi Fortress. As the influence of the Russian Empire grew at an alarming pace, he decided to leave Greece in 1831 and take part in the Polish November Uprising.

Where is the Myhrberg Statue and park located?

Myhrberg spent most of his live outside of Finland. He came to Raahe in 1852 to attend the funeral of Johan Sovelius. Stockholm was the city where the prominent soldier spent the last years of his life. He passed away in 1867. Despite of never holding a public office in Sweden, his funeral was accompanied by military honours. Although he didn’t visit his hometown often, Raahe residents decided to honour their fellow citizen by installing his statue in one of the town parks. The statue was bought by the local community association with the funds collected during the Raahe Day party.