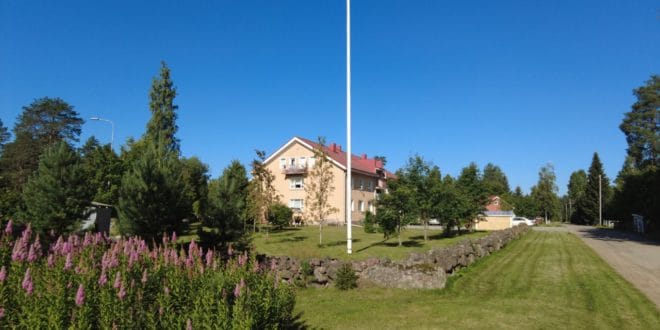 The history of Lampinsaari mining village starts in 1936 when Jaakko Salo, Aate and Juho Lumiaho found boulders containing ore in Alpua and sent samples to the Geological Survey. Although the researchers were interested in the rock, they didn’t examine it until the end of the continuation war. When the war ended, GTK researchers took their interest in the rock to a new level.

They used magnetic and electrical measurements to identify the origin of the boulders. It turned out that the rocks originated in the forest near Lampinsaari and contained zinc, copper and lead. This motivated the Ministry of Trade and Industry to continue the research in that area and eventually allow the construction of the Vihanti mine in 1952.

Construction of the mine

The swamp around Lampinsaari started to be drained in 1952. A railway and a road were built in record time in the same year. Telephone lines, a 86-meter mining tower and 250 family apartments were completed in 1953. The mine opened in 1954. When the ore production began, people from all over Finland came to Lampinsaari. It was mix of tribes with different culture, dialect and customs. Over time, they became a homogeneous group, sharing one spirit and way of life.

The services of the mining village

In 1950s, plenty of children moved with their families to the mining village and 200 miners were in their prime. This led to the construction of a school, a swimming pool and a sports field. A community center was built in 1964. People could watch films, participate in dance events, pistol shooting, play bowling and just hang out with friends. A library operated in Lampinsaari before it became a mining village.

A lake was rented from Raahe for 25 years to be used for fishing and vacationing. Moreover, the village received a beach area and fishing rights from Iso-Lamujärvi Pyhänna. Three shops and a kiosk operated in Lampinsaari in 1950s so people could buy food and other essentials without going to the nearby village.

There was a doctor and a nurse hired by the mining company to take care of the miners and their families. The health house also had a pharmacy. As the population of Lampinsaari went over 1,000 people, a road that connected it with Vihanti church village was built in 1967. This allowed miners to do their business easier and save time on commuting. Many mining workers built a house in the church village. The new road shortened the commute to mine to just 10 km.

Where is Lampinsaari Mining Village Located?

In 1990s the zinc demand fell and the mine became less profitable. On May 17, 1992, the production of ore stopped for good. The production buildings and the tower were demolished. Only the office buildings remained intact. Nowadays, Lampinsaari mining village is quieter and emptier than during its glory age. Many people left the village as they lost their source of income. However, some villagers decided to stay.

They found inner strength and funds to rebuild the village and prevent it from turning into a ruin. Although there are no shops in the former mining village, it attracts visitors with its beautiful nature and tranquility. Some buy a summer cottage there here a summer house, which is much more affordable than anywhere in Finland.