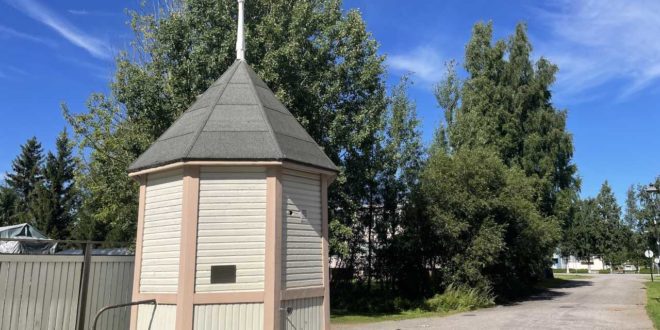 Jacob’s spring was an important source of water for people of Raahe in the 20th century. The information board nailed to the structure says that many rural households took water from the well for decades. The well was closed in the late 1970s.

The Jacob’s spring is located at the north side of Reiponkatu. When it was operational, it looked like a modest structure with a spinning wheel that people turned to get water. After the war, the well was equipped with an electrical pump, which today is still in place. While 50 years ago most Raahe houses had their own well, it was hardly suitable for consumption because it contained much iron and had an unpleasant color.

People usually took laundry water and drain water from the roof after rainfall or snowfall. But when the gutters hadn’t accumulated enough water for the laundry, people used the Jacob’s spring. During summer, people used carts to carry the water to their house. During winter, sled was the best means of transportation. Later, a laundry room was built near the spring, so people didn’t have to carry large amounts of water on long distances and instead wash their carpets on site.

The source is allegedly about 250 years old. The water was soft and suitable for laundry. It was considered that there was plenty of it underground. Hence, the city decided to supply the whole Raahe with water from this spring by building a water plant. But after the first pumping’s, it was clear that the amount of water was not enough to meet the needs of all Raahe people on daily basis.

Moreover, studies found the spring water mixed with seawater when it was sucked in abundance. The plans for a city water system ruined. However, the city still built the well to provide residents with an emergency source of water in case their home well was in a poor condition.

In the 1950s, the works on a water supply system started. Still, not all Raahe people were ready to pay the expensive price of tap water. This is why, many residents continued getting water from the spring until it got completely dry in the late 1970s and was closed for good.

Where is Jacob’s Spring located?

The spring’s name has a Bible origin. In the Gospel of John, Jesus came to a Samaritan city near the plot of land that Jacob had given to his son. On this plot of land was the Jacob’s spring. The Raahe spring got this name only 50 years ago. Before, it was known as Maarala’s well. Jaakopi Maarala was a wealthy man who bought a cottage near the spring.

Because he lived close to the well, he took care of it, cleaned it and kept it in good condition. In this way, people of Raahe started calling the structure Maarla’s well. About 50 years ago, the city of Raahe took control of the well and renamed it to Jacob’s spring. Have you had time to explore Raahe’s other attractions yet?