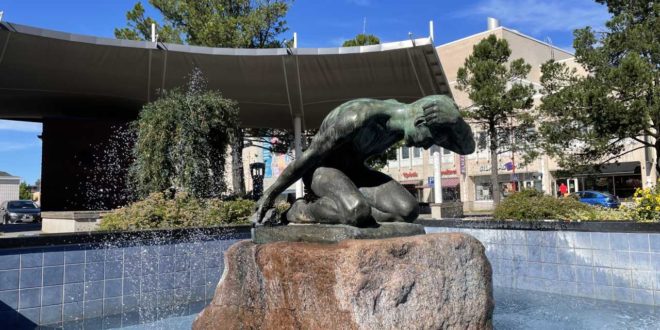 The Defender Statue is placed in Härkätori Park and was sculpted by Johannes Haapasalo in 1908. The statue is a symbol of oppression, showing a kneeling and crunching man who wraps his left hand around his head to protect it and holds a stone in his right hand, being ready to attack the enemy. Johannes Haapasalo was a successful sculptor whose brilliant career lasted for 60 years. His works were recognized and admired both at home and abroad.

While studying in Helsinki, Haapasalo participated in army exercises to oppose the russification of Finland. Because he refused to join the Russian army, he had to flee abroad. He studied at the Copenhagen Art Academy and in 1906 was the student of Auguste Rodin. The accumulated knowledge helped him to start his sculpting career.

Before the beginning of the first world war, the Defender Statue was displayed in Belgium. When the war started, it was buried under sand to protect it from shelling. When the war ended, the sculpture was transferred to Finland, being bought by Johannes Grundström, a tycoon of the Finnish sugar industry.

Johannes Grundström was born and raised in Raahe. He studied at the famous Raahe Business College. When he was young he left Raahe and started a career in sugar commercial service. His career in the Helsinki Sugar Factory culminated with him becoming the managing director. He also worked at the Helsinki Syrop Factory and Kotka Sugar Factory. Most of his career, though, he spent at Suomen Sokeri Oy where he was CEO from 1918 to 1948.

Even if he left his hometown, he never forgot about it. In 1932, Grundström donated the statue of the defender to the city of Raahe. The donation included the requirement that the statue be placed at Härkätori near his houses and Härkätori be transformed into a park. The transformation was made in two years and the result was a beautiful recreation outdoor space with corridors where people could walk and enjoy the nature. The park was beautified with the Defender Statue which depicts a man on his knees holding a stone and protecting his head with another hand.

Where is the Defender Statue Located?

The sculpture is surrounded by sembra pines and Siberian spruces. Although Grundström required that sembra pines be planted in the park, initially birches were planted. When he came to Raahe on a visit to the new park, he was surprised to see other trees than he had asked. The trees were replaced shortly after his visit.