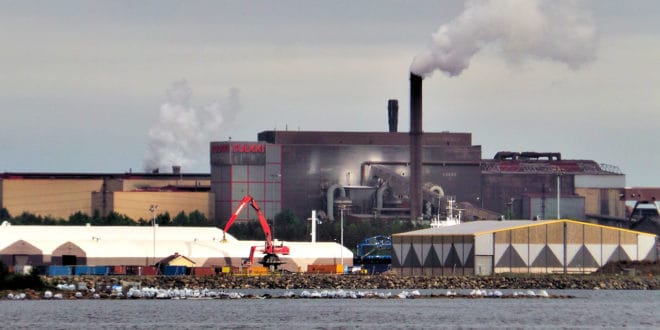 Rautaruukki Raahe Factory is a Finnish company that specializes in production and supply of metal-based components. The company’s history reaches back to 1960 when the Finnish Government decided to create a factory that would supply the country’s heavy industries with metal. In 1994, the company was partly privatized. Since then the state has gradually decreased its shares in Rautaruukki until in 2014 the ownership rights were fully transferred to the Swedish steel giant SSAB.

Rauraruukki has three business departments: construction, engineering and metals. The firm manufacturers a wide variety of components for different industries, such as vehicle cabins, roofing sheets, chassis, hot rolled steel plates and bridge structures. In early years, Raahe steel factory did not use the traditional ingot casting method, but rather switched to the continuous casting technology, which had a better cost-efficiency. The factory had six employees in 1960 and grew to 1,700 at the end of 1960s.

In the 1970s, the company expanded its range of manufactured goods, starting to produce high-quality sheets and pipe products. It helped to increase the customer pool significantly and cover the needs of more industries. In 1976, the second blast furnace was founded in Raahe, which helped to double the production. The company grew at a rapid pace and at the end of 1970s it had over 7,000 employees.

In the next decade, Rautaruukki established sales offices in Western Europe. Some valuable acquisitions were made, including a Danish factory specialized in color coating works, a wholesale business in Norway and a tube mill in Germany. In 1989, 10,000 people worked for the company.

In the 1990s, Rautaruukki invested heavily in the upgrading of the production processes. In the new wave of expansion, the company bought a steel roof factory called Rannila, which helped it enter the construction business. Also, it opened markets in Eastern Europe in countries like Czech Republic, Poland, Ukraine and Baltics. In 2000, Rautaruukki had 5,000 employees outside Finland and 12,000 employees altogether.

When Sakari Tamminen became the new CEO in 2004, he initiated a vast renewal program. The marketing name of all companies of Rautaruukki Corporation was changed to Ruukki. The company started to focus on the production of special steel components and providing business solutions in the construction and engineering industries. Ruukki dealt with engineering projects all over the world. Some important acquisitions made in 2000s included Velsa (2004) and AZST-Kolor and Steel-Mont (2006). The exploration of the Chinese market started in 2005. Nowadays, there are two sales offices in Shanghai and Beijing.

In May 2011, the corporation was divided into three business areas: construction, engineering and metals. In 2011, the manufacturing of a new product began, an energy panel that helped buildings to become more eco-friendly. Moreover, a sales office was opened in one of India’s largest cities Mumbai. In 2014, Ruukki was bought by the Swedish steel company SSAB. Nowadays, SSAB Raahe Factory covers an area of 500 hectares, has its own power plant, own harbor and one of the largest laboratories in Finland.

Where was Rautaruukki Raahe factory located?